Olomouc Holy Trinity Column is the largest collection of Baroque statues within the framework of one sculptural group in Central Europe. 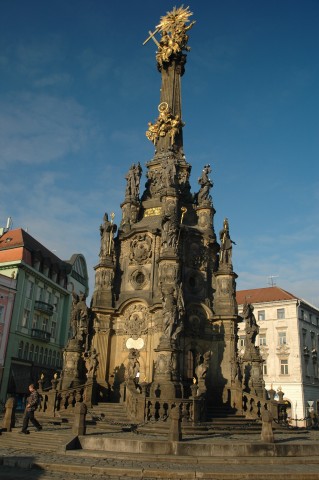 It reaches a height of 35 metres. The lower part of the column contains a chapel. The sculptural decoration of the column is made up of 18 statues of saints, 12 figures of torchbearers, 6 reliefs with half-standing apostles, a sculptural group of the Assumption of the Virgin Mary located in the central part of the shaft of the column and finally the top sculptural group of the Holy Trinity. Both of these sculptural groups were cast into bronze and consequently gilded. The figures are enveloped in light, airy drapery with lively expressions on their faces and corresponding gesticulations of their hands. The overall impression is thus not one of exaggerated weighted Baroque dynamism, but on the contrary gives a natural and harmonic impression.

The Holy Trinity Column came into existence at the initiative of the local master stonemason Wenzl Render who supervised the work from the year 1716 and even financed it at the beginning. By the time of his death in the year 1733  Render had managed to construct the first floor with the inner chapel. Participation on the part of a number of additional craftsmen and sculptors continued up until the year 1754. Apart from Philipp Sattler the main contributor to the sculptural work was Andreas Zahner. After its completion the column was consecrated by the Olomouc Bishop, Cardinal Troyer with the personal participation of the Empress Maria Theresa and her husband Francis I of Lorraine. The Holy Trinity Column is a monument of world renown and was registered onto the UNESCO List of World Cultural Heritage in the year 2000.